Living in a different country and getting the chance to interact more with the locals, rather than just see the selective sites and bugger off happily back to your home country, you get a chance to see the more nuanced differences in their culture to your own. It’s easy to just assume that people in another western country are going to be like your own countrymen, that they will behave more or less in the same way, and that the differences are going to be more in the location and language than the culture. We binge watch the same shows! So I expected that Americans in the south would be like Australians, except with a different accent, pumpkin pie, guns and God. Not so.
An example – merging etiquette.
In Australia, if someone slows down to let you merge in front of them, you give the thank you wave. Doesn’t have to be much, just a raise of the hand so they can see it through your back window (it’s also handy to mollify someone you’ve cut in front of by pretending to be grateful to them for “letting” you in). And if you don’t, 9 times out of 10 I would guess that the most generous, let-you-merge-in-er, is put out that you didn’t acknowledge their grand gesture of generosity. You start looking out for that wave once you’ve let someone cut in. 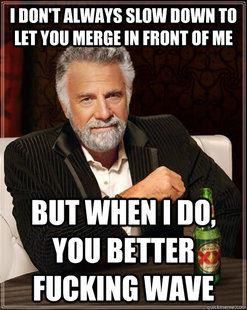 The merging thank you wave doesn’t seem to be a thing in East Tennessee. It’s one of those behaviors you believe are the case everywhere, because you haven’t lived anywhere that doesn’t happen. Because you’ve only lived in one country before. You just take for granted that it is human rather than cultural.
So I ask you now, Tennessee – where’s my fucking thank you wave?! Where’s the acknowledgment that I had to momentarily apply the brakes? Where’s the gratitude? I know you can do politeness; I’ve seen you be super polite in so many situations, what with your pleases and thank yous and helpfulness and calling me Ma’am. I want my wave, damn you! 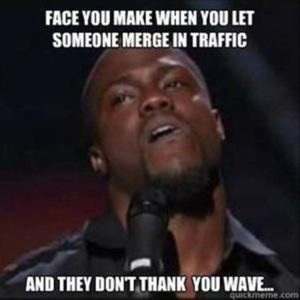 It’s almost as if you think that it’s not a big deal for me to do that or something, and not deserving of a lavish social reward!