We are heading off for a trip to Miami on Thursday, which I am wildly excited about. It’ll include a trip to Key West and a visit to the Everglades. We’ve had quite a few people tell us some of the highlights of their own trips to Florida.

One of them told me that I’ll enjoy the trendy South Beach area of Miami, that it has a real party atmosphere and lots to see. That the local specialty is stone crab (although they are just out of season now), and that I will not see the entire crab, only the claws, as they are harvested by removing the claws and throwing the crab back in the ocean, where its claw will grow back quickly. this makes it a sustainable food (if it is removed properly, I guess. And how will they fight off the other crabs in their hood without claws?).

Someone told me that Duval street is the main street in Key West, that the touristy thing to do is watch the sun go down, and that the descendants of Ernest Hemingway’s cats are still there, identified by their extra toes.

A friend of my in-laws said that they saw lots of alligators while they were walking in the Everglades (What the fuck?! WALKING around, not even worrying about being eaten? Americans don’t realize how dodgy their wildlife is!).

But probably the best thing I’ve heard so far, that fills me with joy, and hope that Florida is as weird and wonderful as I’ve been lead to believe by memes and internet comments under news stories (including the title quote)? I was recently told by someone who has spent time in Key West that him and his wife were there to see the drag races. Which I boringly assumed would involve cars. Nope.

This is probably the best thing ever. I would watch the shit out of this. This is a race I could actually enjoy watching in its entirety, and cheer on, and bet money on, and wear a fascinator to. How could we have missed this by just a month!

Oh well, I guess there’s still the hope that I’ll run into this guy. 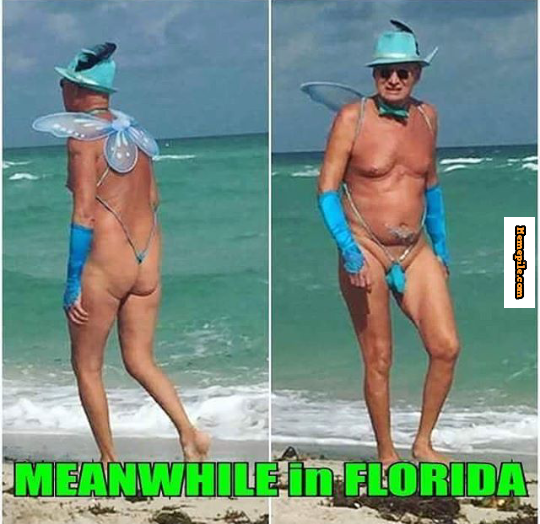