I think some of the best travel advice comes from people who make the dumb mistakes. Who are ill-prepared. Who jump into it without as much planning and preparation as they probably should have, because they are lazy.

My husband and I recently went on a road trip from Tennessee to Toronto, Canada. It was a pretty spur of the moment thing. We had at least checked if we would be able to get into Canada with our current US visa status, and more importantly, get back into the US (yes to both, fortunately), but…..it still didn’t feel like we were going to another country, since we were driving across a border in our car. So we kind of didn’t treat it as such. And while we enjoyed it, we could have saved ourselves some stress with a bit more planning.

Learn. Learn from our foolish mistakes. 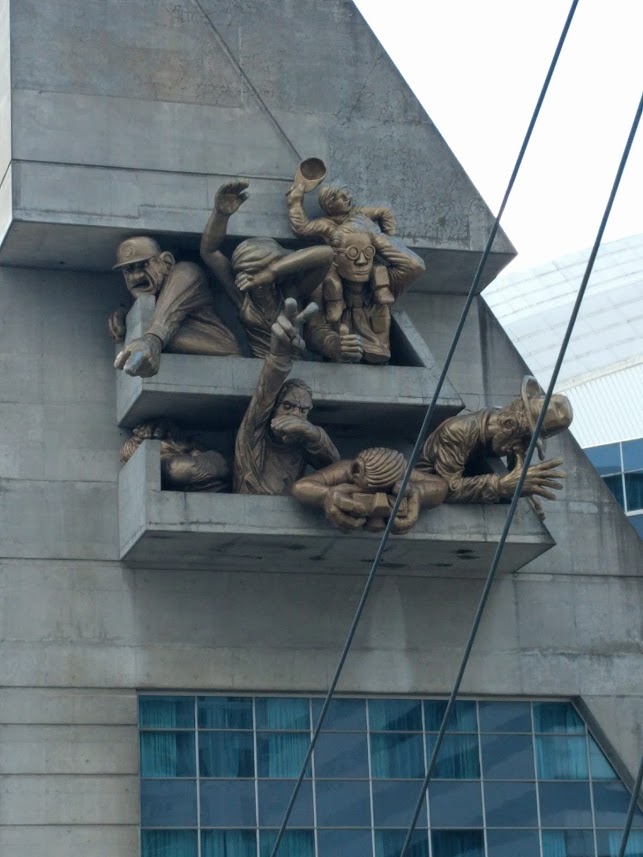 The plan was to cross the border and navigate to Toronto, look up a suitable motel while driving there and book a room in advance. Unfortunately, this very smart, sensible plan falls straight on to its arse when you lose phone coverage, which happened very shortly after crossing the border. If we had flown overseas we would have made plans for this, however it did not even enter our heads that this would happen once we entered Canada by car. We ended up parking in Toronto and found a restaurant boasting fancy burgers and, more importantly, free wifi.

Hey, do you think this might be a hipster burger joint?

Once we had internet connection sorted, we could book accommodation and download google maps to navigate there, but it would have been a nice step to skip.

Oh yeah, we don’t know what the customs regarding tipping are here! To the internet we went (free wifi! You wonderful, wonderful thing) to make sure we did the right thing by the Canadian servers. It sounded like a similar system to the US, with a real plus: they brought the EFTPOS machine to the table, and you could select the tip percentage you wanted to pay. So you didn’t have to do any maths whatsoever!

Australia doesn’t share borders with any other country. So we’ve never had the experience of driving over a border and the currency changing. We just realized shortly after arriving in Toronto that handing over $US probably wasn’t going to be well received. Off to find a currency exchange place! Canadian money is pretty, and polymer banknotes just like Australia, one of the countries that utilized that technology (the first I think). Like Australia, they also have the Queen on at least one of their notes. 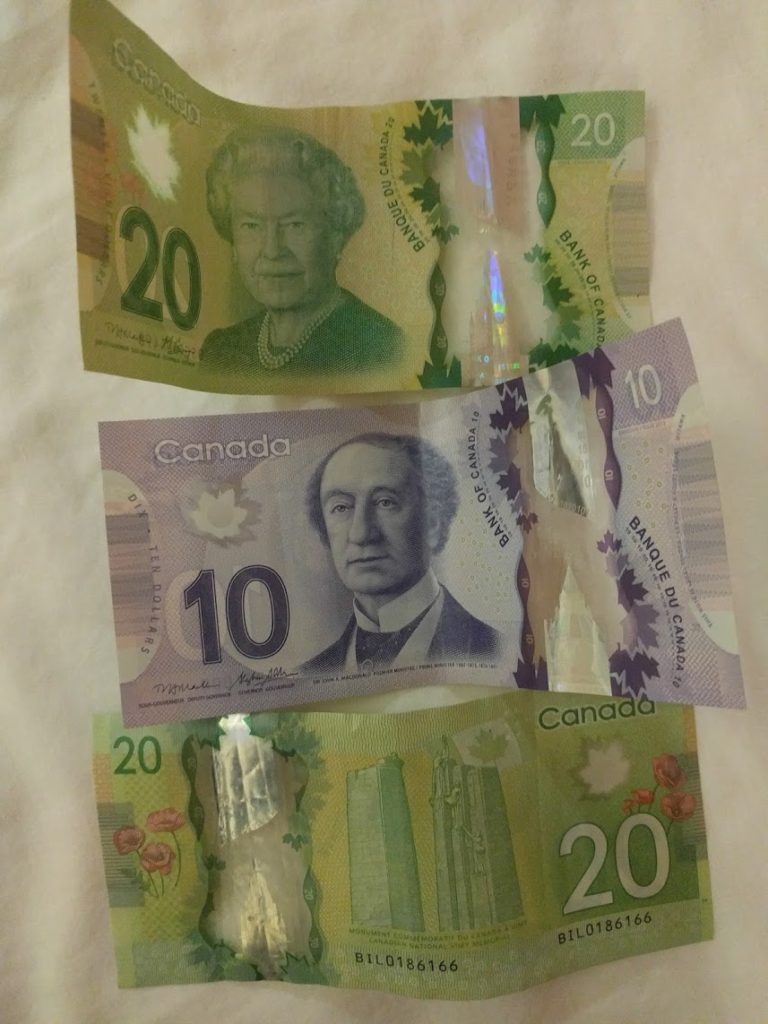 Your Majesty! We’ve missed you!

We didn’t use the Canadian currency much, just used our US debit cards with no issues.

Toronto seems to be a very bike friendly city. There were a lot of people using bikes, and the cars seem to be respectful of them as fellow road users. We had to remember to look out for them ourselves while crossing roads, though.

We are cheap bastards when it comes to accommodation, focusing more on what we will see when we venture outside the hotel than how fancy it is inside. 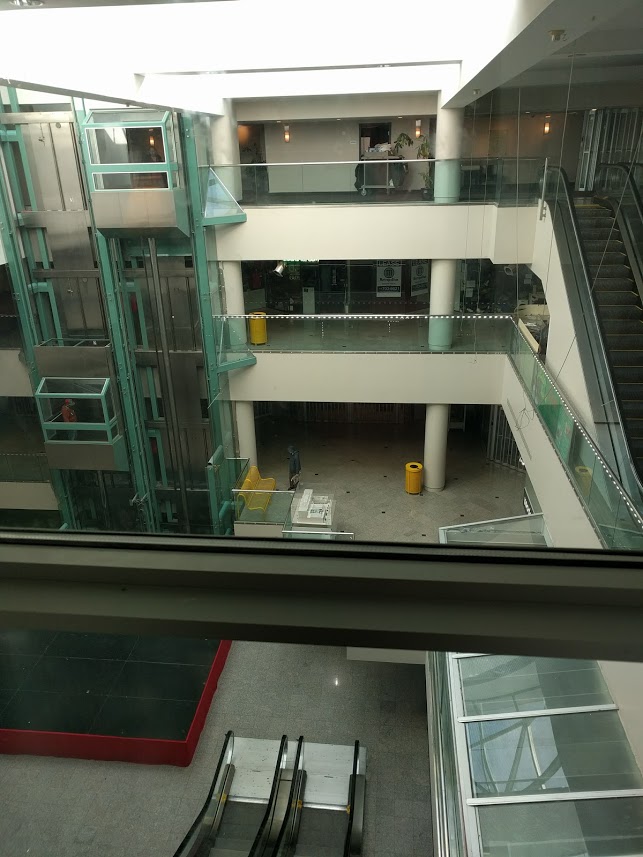 Look at our breathtaking view!

When I booked and saw it was $114 per night, my tightwad heart leaped with joy. Then I saw the bill. A $149.88 room charge, a tourism fee, a HST of $20…..what? The discrepancy in the room fee was due to exchange rate (the quote I saw online was in $US), but what about the rest? The HST is a type of sales tax which is not always included in the advertised price, which I should bloody be used to after living over a year in the US but which caught me by surprise here. And the Tourism Fee, or DMP? It is a voluntary fee that you may not always be informed is voluntary. Ours came to just $3.99 which doesn’t exactly break the bank, but if you pay more than we do for a hotel it will start to add up, so know that you don’t have to pay this.

People in Toronto just seem….healthy. And happy. There are a lot of people riding bikes, and not all of them look like they are hard-core into biking – they just look like commuters. The cars seem to adjust for bike riders and accept them on the road with no issues, at least none we could see. Many riders weren’t wearing helmets. And the trams are put to good use here as well. 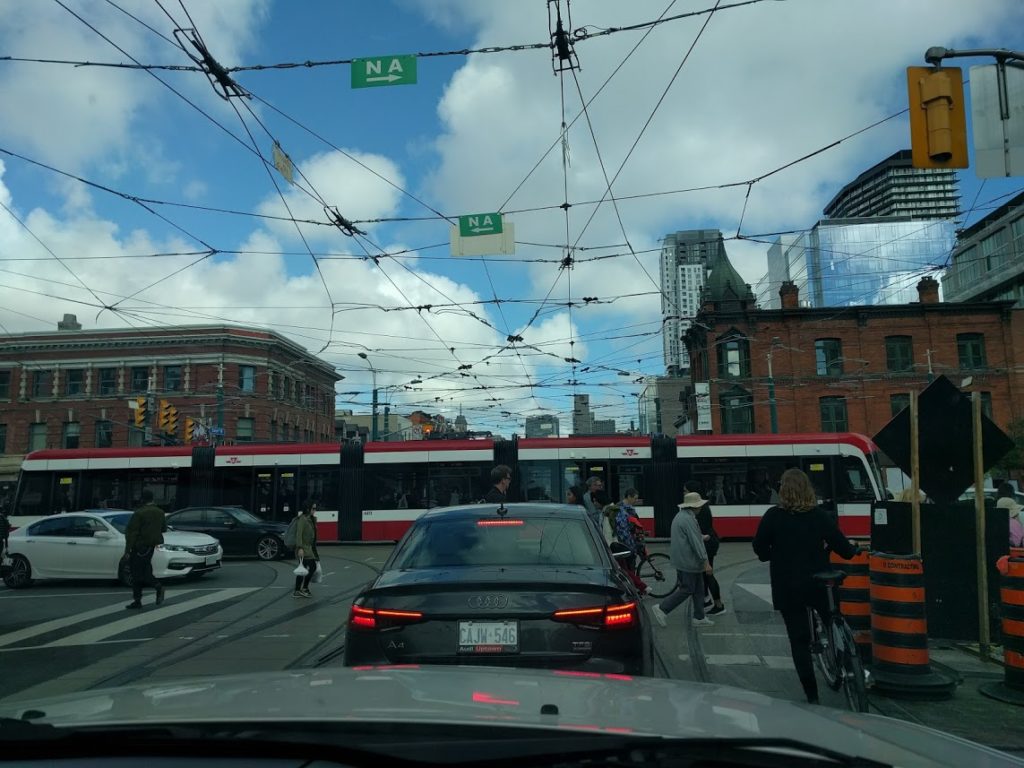 There were quite a few homeless people around the city. The weather was still pretty good, but I expect it would be a hard place to sleep rough once winter hits. 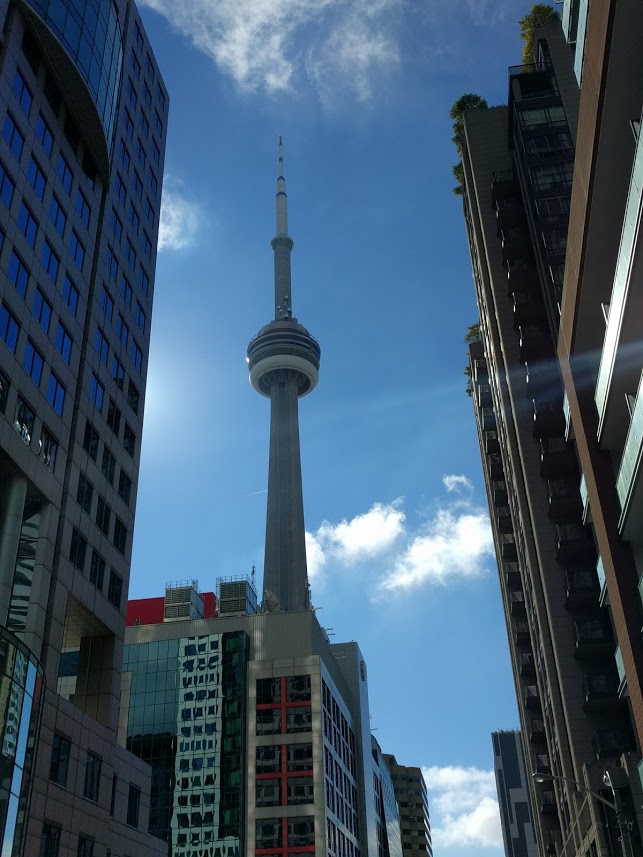 There is a significant Asian population. We stayed in the Chinatown area, and I was happy to get to eat good, authentic Vietnamese food, which I loved eating in Sydney but has been hard to find in Tennessee.

There was definitely a bit of an arty/alternative feel to the place. 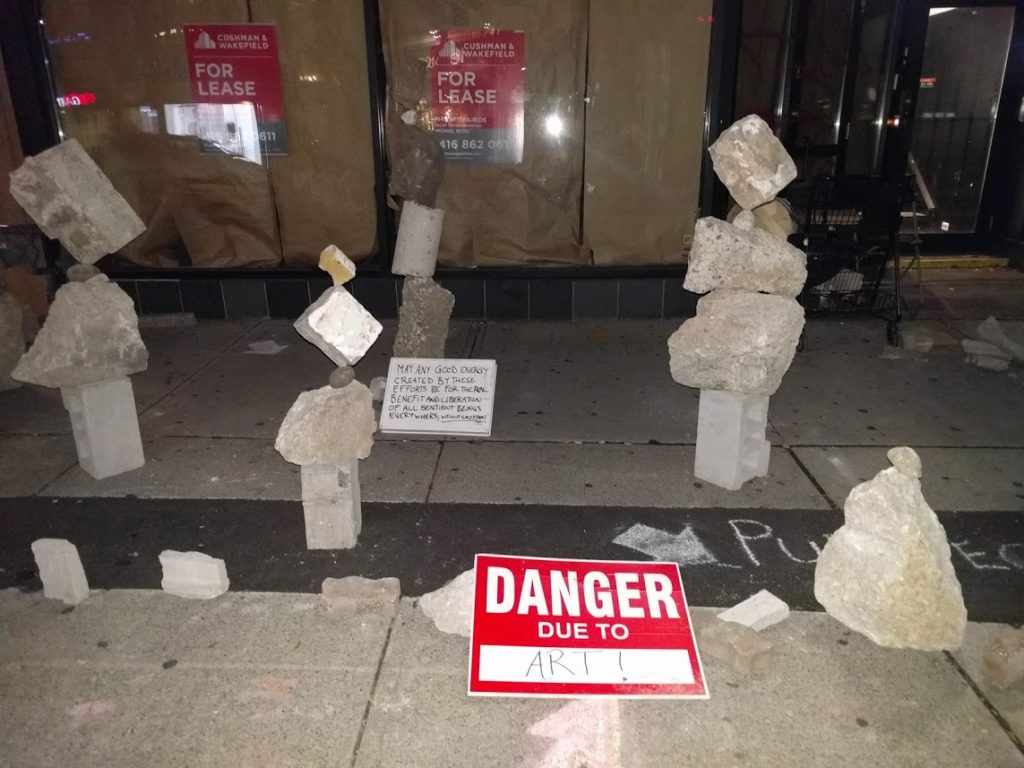 There were several stores you could buy furs from, which surprised me. Canada would definitely be a place where it would be practical to wear them given how cold it gets, but I was expecting the wearing of fur to still have a stigma attached to it. I guess it depends how the fur is sourced.

The city would have its crime like any other, but we felt pretty safe wandering around at night. 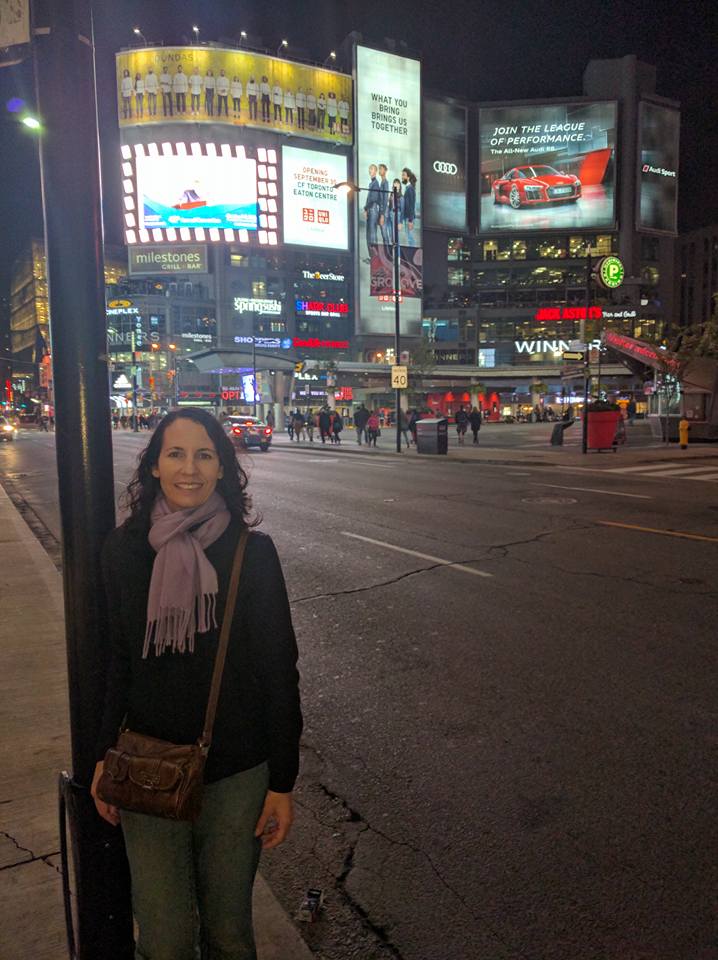 But just like every other country, Canada has some disgruntled citizens. 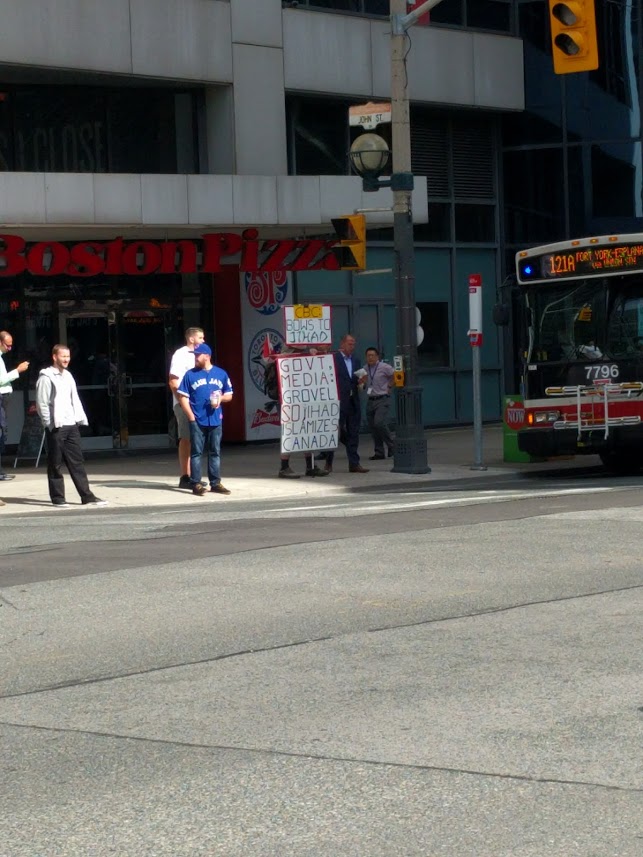 But….can every other country boast such manly restaurants? 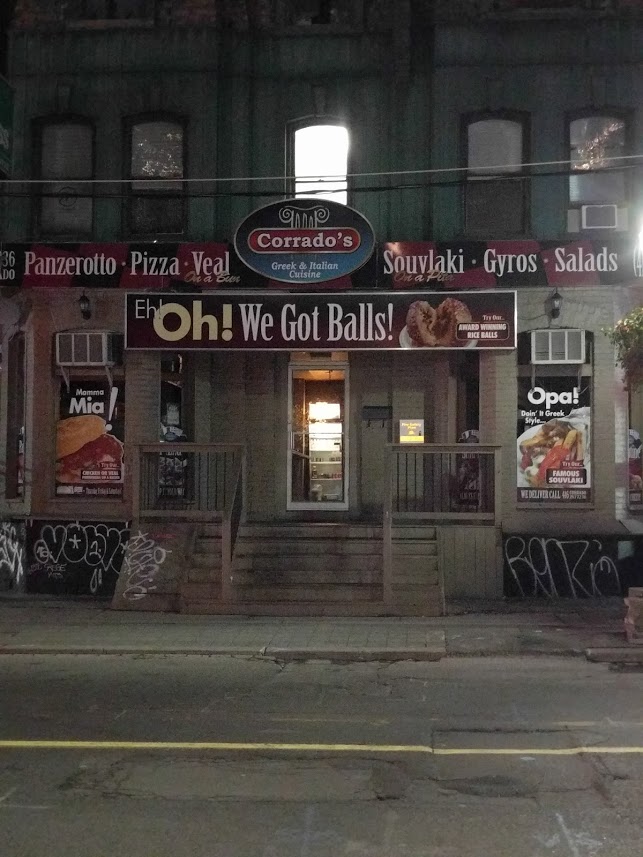